Hub and spoke to eleven internationally renowned resorts all within 60 minutes of downtown Salt Lake City, Mayor McAdams noted the winter season is a major draw card to the town and one he wants to embrace for a tourism focus promoting both mountains and metro as a combination.

Ski Utah a consortium group within the USA State is reveling in the endorsement and has launched a new video “From Mountains to Metro” to show visitors just how easy it is to combine the city with the ski areas in this hyper-lapse video featuring City Creek Centre in downtown Salt Lake City.  http://www.skiutah.com/explore/videos/from-mountain-to-metro

Salt Lake City teeters on the edge of the Wasatch Mountains, one of the most iconic skiing destinations in the world.  Less than 60 minutes separates the bright lights of Salt Lake City from Park City and the Cottonwood Canyons, where Alta, Brighton, Snowbird, and Solitude are located.

Utah is home to The Greatest Snow on Earth® and boasts over 500 inches (1270 cms) of snow on average per season. 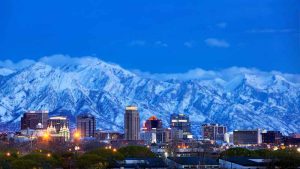